Folks hiking in the high country here in Northern New Mexico might be excused from puzzling over all the names we use for the slopes and piles and fields of loose rock we see everywhere up in the mountains. Some of them are odd names indeed, inherited from Northern Europe, and others seem like very unlikely word combinations.

As bedrock weathers at the Earth’s surface, the most basic product is simply loose broken rock, or rubble. Rubble is found where the physical disintegration of rock exceeds chemical decomposition, conditions that are common in deserts or high in the mountains, near or above timberline.

The simplest accumulation of rubble is the talus pile. Talus piles are aprons of angular rock fragments piled up against the cliff or slope from which they have fallen. They typically stand at the ‘angle of repose’ for loose rock, between 30 to 35 degrees. Another frequently used name for talus is scree. 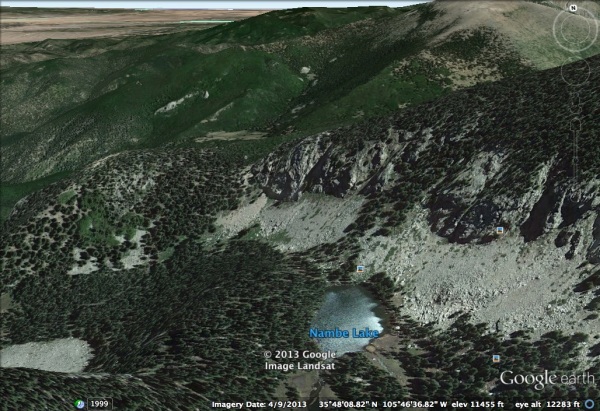 In the high country,  these piles of rubble may continue to move downslope, flattening out and acquiring a pattern of lobes and wrinkles that indicates viscous flow. These features are called rock glaciers. Rock glaciers are found near or above timberline in high mountains, not in deserts. Their slow mobility is caused by the seasonal freezing and thawing of rain and snowmelt among the rocks.

The all-embracing name for rock debris transported and dropped by a glacier of flowing ice is drift. Drift that is deposited directly from the ice, and not reworked by running water, is called till. Valley glaciers, such as those once common along the crest of the Sangre de Cristo Mountains, are packed with rock debris along their bases and sides, and carry an additional load on top, where rockfalls add their share. This debris tends to pile up at the terminus of the glacier, where the annual contribution of rubble heaps up into an arcuate terminal moraine of glacial till. Embankments of debris left along the valley side are called lateral moraines. Terminal moraines often impound  small alpine lakes, the joy of the high country.

Finally we have the most puzzling of all these rubbly features: the felsenmeer, or block fields. Felsenmeer means ‘sea of rocks’, and while they are most common in the subarctic regions, they are also found in high country, near or above the timberline. A felsenmeer is a patch of ground covered by naked, boulder-sized angular rocks, usually several feet deep. Like moraines, they are relic features from glacial times, but unlike moraines, they were formed in place and not transported. In other words, block fields are not glacial drift. They are found on slopes of 25 degrees or less, sometimes in flat, winding patches.

Felsenmeer formed under conditions of permafrost, where exposed bedrock was broken up, in place, by frost shattering. Why they appear today in isolated patches is not clear from the literature.  They strike me as a sort of Ice Age wound that won’t heal.