Resident of the Butterfly Pavillion

Creepy crawlies!  All tiny children are fascinated by the world and the things that inhabit it.  Some kids learn early to fear or at least loathe “bugs”–all things with more than four legs.  And then there are kids like me who stayed mesmerized and became biologists.

If you’ve got one of the latter kids or were one yourself, then you might enjoy one of the places I visited in July.  The Albuquerque BioPark includes a zoo, nice aquarium (much of which is dedicated to the various life zones of the Rio Grande from its mountain headwaters to the Gulf of Mexico), and botanic garden.  Within the botanic garden is the Butterfly Pavillion : an outside, screened aviary for butterflies.  Open in the summer months only, the aviary holds around 50 species of butterflies from more colorful North American species to big, bright neotropical species of Central America. 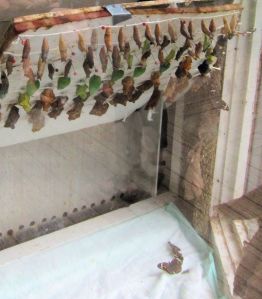 Butterfly chrysalises hanging until emergence of the adults

Volunteers in the aviary point out some of the more interesting species as they flutter (or zoom, or roost) among the flowering shrubs and nectar feeding stations.  Some butterflies are quite large and some quite small although spectacular.  Butterflies are acquired from three butterfly “farms” which raise the caterpillars and ship them in the chrysalis (cocooning) stage.  They arrive by overnight shipment in padded boxes and then hang from strings like little tiny Christmas tree lights in a humidified display case so visitors can watch the butterflies emerge.

In addition to answering questions, volunteers also guard the double doorway (which is equipped with mirrors) to inspect departing visitors for stow-aways!

Of all the bugs, butterflies are probably the easiest to love.  They are colorful, non-threatening, and appear in daytime.  On the other end of the spectrum are spiders, scorpions, and centipedes.  These arthropods lurk in the dark and encounters can be painful or even life-threatening.

The Harrell House Bug Museum in Santa Fe is dedicated to all arthropods, but certainly doesn’t shy away from the less charismatic ones.  There are beautiful mounts of colorful dragonflies, butterflies and moths from around the world.  One live display I found particularly nice was dedicated to some of our local species: “stink beetles”, scarabs, and velvet ants.  And there are live displays of tarantulas, a mount preparation area, and a petting zoo.  Yes, I don’t know what else to call it–a number of pretty docile critters are taken out of cages by a staff member and some are offered to guests to pet or hold.  I found the slow-moving giant millipede rather charming myself! 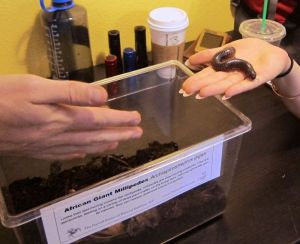 The style of the mounted displays is very dramatic or theatrical; this is not your typical, realistic natural history museum style mount.  Big wingspans and flashy colors are shown to their best advantage.  Dozens of insects are mounted side by side in large panels without the usual scientific labeling.  Be sure to ask which ones are found locally–it puts New Mexico species in better perspective.

One of the smaller displays

The pride of the museum is the 4 by eight FOOT panel which currently contains hundreds of species so aesthetically arranged that it could hang in a modern art museum.  Pull up a chair and admire the piece.

The Harrell House Bug Museum occupies a deceptively small store front in DeVargas Mall (there are individual rooms in back).  Cough up the small entry fee when you have an hour, take the kids, and see it all through younger eyes!