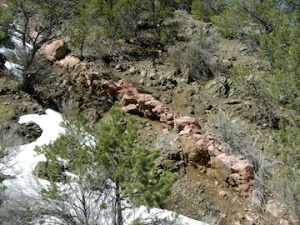 At first you might find it hard to believe, but the State of New Mexico has a greater variety of volcanic features and volcanic rocks than any other state in the country, including Alaska and Hawaii. It’s true we don’t have any actual erupting volcanoes – at present – but we do have rocky records of just about every kind of igneous activity that can occur on the continents. Among these records are structures that seem to catch everyone’s eye while driving through the New Mexican countryside, or hiking in our mountains: igneous dikes and sills.

Visually, a dike looks like a natural wall of stone, sort of like a dam – or dike. A sill appears on a hillside or cliff face as a horizontal band of stone, like a window sill. Since both dikes and sills are originally of subterranean origin, some sort of regional uplift and/or erosion must have taken place to expose them at the surface. 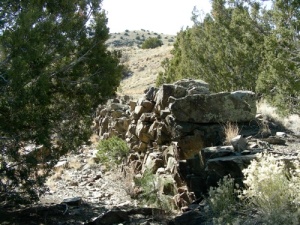 A dike of andesite in the Cerrillos Hills

When you get close enough to examine them, you’ll discover that they’re made out of some kind of hard igneous rock. Many of them are much more durable than rocks that surround them, which is why they so frequently stand out in relief, or make bold cliffs. Here’s a dike of the volcanic rock andesite sticking up out of the ground in the Cerrillos Hills, looking just like a low stone wall:

And here’s a sill, made out of similar andesite, capping a hill of soft shale, not far away: 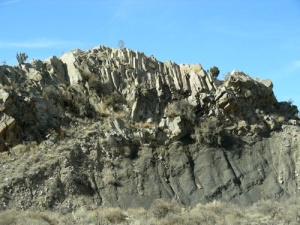 Dikes and sills are intrusive igneous structures. Intrusive means they intrude upon – or more exactly, intrude into – their surrounding rocks. Igneous literally means ‘born of fire’, and it refers to the rocks that make up the dike or sill, which were originally melted and incandescent when they were intruded. And structure is one of those useful, multi-purpose words that refers to something with boundaries.

So dikes are sheet-like bodies of magma that have cut across pre-existing rocks at a high angle, and subsequently frozen in place. Picture a large crack forced open by melted rock, and then filled and sealed up by the melt when it cooled. Generally that magma was on its way somewhere – like the surface of the Earth – and so dikes are frequently found in eroded volcanic areas. But they are also found around great igneous intrusions that cooled deep in the crust, filling fractures in the surrounding rocks, and filling the cracks that form as the big intrusions cool. Here’s a huge dike of coarse pink granite intruding brown quartzite up near the hot springs at Ojo Caliente, in Northern New Mexico:

This dike was nowhere near the Earth’s surface when it formed. Miles of crustal uplift and miles of corresponding erosion were required for us to see this.

Similarly, sills are sheet-like bodies of magma that have cut across pre-existing rocks, but in a way that parallels the original structure of the rocks they cut. The magma forces itself along a bedding plane in the sedimentary rock it is intruding, or between beds of tuff and lava, laid down earlier, or along the foliation planes of pre-existing metamorphic rock. Very typically this intrusion is in the form of a horizontal sheet. The magma bakes the rocks both above it and below it, which is one way geologists distinguish sills from lava flows.

Once you get the knack, you’ll be able to spot some dikes even from a great distance, like this dike of dark basalt in the northern Jemez Mountains: 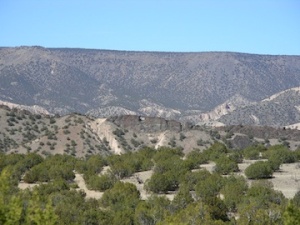 And pegmatite dikes are very easy to identify when you’re hiking in the Rocky Mountains: 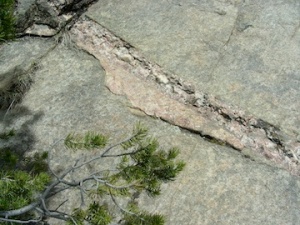 A small pegmatite dike cutting across gneiss, not far from Santa Fe

As we all know, however, a little learning is a dangerous thing, and dikes and sills have lookalikes that will fool you, until you examine the outcropping more closely. Here are some beds of sandstone tilted up on end and differentially eroded into natural walls that look just like dikes: 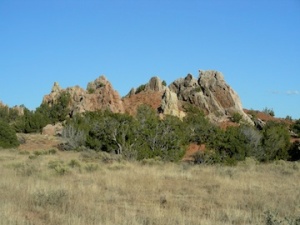 Upended beds of sandstone standing in relief like walls

And this lava flow capping a mesa looks an awful lot like a sill, but it isn’t: 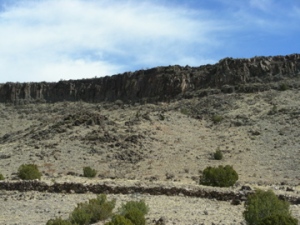 And then there are the real mind benders. Here is an igneous sill, tilted to the vertical by nearby disturbances, that looks just like a dike: 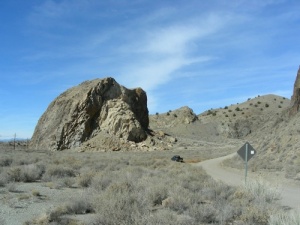 The Devil’s Throne in the Cerrillos Hills.

1 Response to Dikes and Sills