Summer monsoons have arrived, much to the great relief of man, beast and flowers. Plants seemingly dead are now flourishing and flowering. And at least some of those flowers are being visited by hummingbirds.

But wait! It’s not a hummingbird! Behold the amazing “hummingbird moth” which mimics the birds in size and habit.

This tribe of moths, known as sphinx moths or Sphingidae, actually number about a dozen different species in the Santa Fe area. One of the more common here and certainly one of the most widespread is the showy White-lined Sphinx, Hyles lineata.

These moths feed like hummingbirds by hovering before tubular flowers and extracting the nectar from deep within using an exceedingly long proboscis, which is a specialized drinking straw. To watch the “tongue” unfurl and probe each flower is to witness the aliens among us.

Like many moths, they tend to roost during the day. The showy body and underwings are tucked away underneath upper wings which can be surprisingly effective camouflage for so big a bug. As dusk approaches, they take wing. I don’t know if they are truly nocturnal or simply dawn/dusk feeders since I need some light by which to observe them. 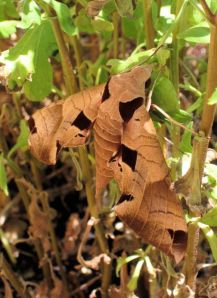 To my chagrin since I am a gardener, the group also encompasses species known during the caterpillar stage as the Tomato hornworm, Manduca quinquemaculata and the more common Tobacco hornworm, Manduca sexta. Mid-summer early mornings see me with coffee cup in one hand patrolling the tomato plants because a single caterpillar can wreak havoc on the patch, stripping leaves and chomping through the little green tomatoes. And despite their size (three inches long and as big around as my finger), they are devilishly hard to spot as their color and shape look just like a tomato stem. If I do track them down, they will rear up and look threatening (the sphinx pose which gives them their group nickname) especially with the spiky but flexible “horn” near their butt. Yet it’s all bluff and I’ll send them off to the compost pile. The ones that escape me (or that have sensibly chosen some other feast than my cherished tomatoes) go on to overwinter as pupae underground and become moths.

If you’re in Santa Fe during the summer, take a chair and favorite beverage on the patio one evening where you can watch the “hummingbird” show.

[My thanks to husband Terry for capturing the flying White-lined Sphinxes.]