“…the birds and the bees and the flowers and the trees….” 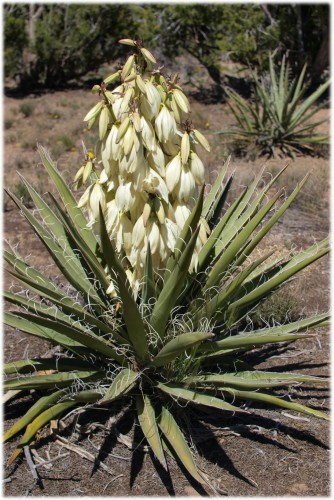 “It takes two to tango” as is said. The same is true of many New Mexico plants and animals.

When I was growing up in the Midwest I was familiar with yucca (most probably Yucca baccata), planted around homes and especially in cemeteries. I saw it cultivated in England, too. An older college professor in Ohio explained that it had been widely planted in the early 1900’s as a hardy substitute for cemetery lilies. Its formal, upright leaves and waxy, white flowers served as a perennial which withstood the harsh winters. What I never saw until moving to the Southwest were yucca seeds.

Local yuccas flower annually in May when water is available. The thick stalk rises from the center of the plant like an asparagus stalk on steroids, sometimes three feet high and an inch-and-a-half across. The waxy, bell-shaped flowers open but hang pendulous from short stems around the stalk. As many as 60 blossoms may form on several stalks per plant. But unlike most other local plants which utilize several ways to fertilize the ova in the flower to form seeds, each yucca species holds itself for only one–its special yucca moth, a species of Tegeticula or Parategeticula.

Yucca moths are small, nondescript white moths which live very briefly as adults. So briefly in fact that the females have no working mouthparts and do not feed. Instead, their mouths have evolved to become special pollen tweezers. After meeting and mating with a male moth, the female goes in search of a blooming yucca. Upon alighting, the female moth gathers a ball of pollen which she holds in her “mouth”. She then flies to another clump of blooming yucca–never the same as where the pollen has originated. She finds a flower of the right age, ready for fertilizing and unvisited by another moth (which would have left a scent marker). The moth then lays a small number of eggs on the part of the yucca which will become its fruit (not too many or the fruit will abort), then moves to the other end of the fruit and deposits some of the pollen to ensure that the fruit will develop around the now-fertilized seeds. This process is repeated several times so that a single moth may fertilize a number of flowers.

Once the larvae hatch, they feed on the developing yucca fruit for several weeks before emerging and dropping to the ground. They bury themselves and form a cocoon, overwintering as pupae. In spring, they emerge as the yuccas begin to blossom to repeat the cycle.

Without the yucca, the moth cannot survive. And without the moth, the yucca cannot reproduce. Yes, in the case of New Mexico’s state flower (Yucca glauca), it really does take two to tango.

The natural outdoor world is exciting, restorative, and infinitely fascinating. More people should spend time there!
View all posts by Outspire →
This entry was posted in Uncategorized and tagged flower, insect, moth, New Mexico, outdoors, yucca. Bookmark the permalink.

1 Response to “…the birds and the bees and the flowers and the trees….”