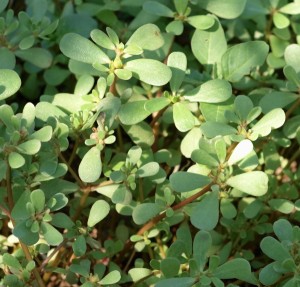 It’s late August in New Mexico and the Summer rains have prompted all manner of wild plants to flourish. In the mountains, it’s time to hunt wild mushrooms like chantrelles and boletes, which some call porcini, as well as several kinds of berries.

In lower elevations, though, are lots of green things which most folks would look on as bothersome weeds but were to the early inhabitants of the area–and can be for us today–both nutritious and tasty additions to the table.

For brevity’s sake, I’ll only mention two but they’re goodies.

Purslane (Portulaca oleracea) has flat, fleshy leaves and reddish stems. The plant grows closely to the ground and is related to the annual Moss Rose (Portulaca) which is grown for it’s flowers. In our area P. oleracea has pretty well replaced the native, very similar purslane but together these plants have been “one of the most important wild food plants of Puebloan ancestors for at least a thousand years” (Dunmire and Tierney, 1995).

Although always around, this year in my neighborhood the purslane seems especially luxuriant. It is ridiculously easy to pull the shallow-rooted tender plants, clip off the roots and have a bucket of beautiful greens. After a thorough plunging in a couple of changes of water (I’m not a fan of sand or extra protein), whole stems go into a saucepan to steam or the skillet to sauté. I prefer to cook until the greens have darkened, leaving me a nicely flavored, ever-so-slightly tangy side dish. The stems which seem so rubbery on the living plant yield a texture not unlike the home-cooked stems of fresh spinach. Very nice! Purslane may also be eaten as a raw salad green, but because of texture I prefer mine cooked.

Wild Amaranth, also called pigweed, is another delicious wild green. It’s perhaps more appreciated elsewhere–a friend who recently returned from Greece said they were given bags of wild amaranth by their landlord there as gifts. There are several species of amaranth here in New Mexico, all of which grow upright as much as three feet tall (although usually shorter) and have fuzzy or bristly flowers at the junctions of the dark green leaves. Our amaranths are not the type grown specifically for its seed, although the ancient Puebloans did use seed from these wild plants in addition to eating it as greens.

Young plants can be eaten whole, but I think it’s better to strip the leaves and discard the rest if the plant has already gone to flower. There is a fair amount of oxalic acid in amaranth leaves, so cooking is in order. Wash thoroughly and cook as spinach. The greens are high in vitamins A, amino acids and other nutrients and really do taste as good or better than commercial spinach.

So watch carefully while you’re out on your next hike–you may be cruising right past some mighty fine eating.

1 Response to Eat Your Weeds