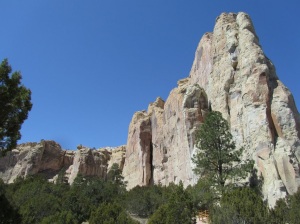 Deb Farson is a freelance technical writer and editor who is having a great time exploring her new home state of New Mexico. See more on her at FarsonInk.

I’ve zipped past the El Morro National Monument sign on I-40 at least a dozen times in my trips back and forth to California. In mid April on my trip home to Santa Fe, I thought it was finally time to slow down and make a side trip to check it out. I dropped south from Gallup toward Zuni, and finally east through Ramah—it was 56 fairly deserted miles of piñon and juniper savannah. El Morro (the headland) is a large golden sandstone bluff that is markedly different from the surrounding landscape.

The bluff was a mecca for early Puebloan peoples and explorers because of pool of water at the base of the bluff. Once there, people realized that the sandstone made a handy writing surface—it is covered with 1000 year-old petroglyphs and signatures of early Spanish explorers. The earliest inscription is Don Juan de Oñate in 1605, and Don Diego de Vargas left his mark in 1692 on his way to “pacify” the Zunis. 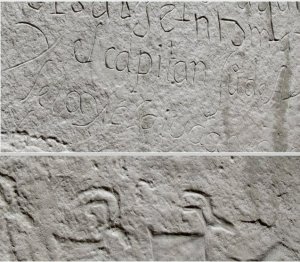 The Park Service has created a half mile loop up to the wall, and has a pamphlet pointing out names of interest and translates the ornate Spanish inscriptions. After the early Spanish, came the wagon trains, the US military and the railroad construction—a real history of New Mexico captured on one wall. A longer 2 mile loop trail takes you up to the top of the headland and the 700 year-old Atsina ruin with spectacular views.

The bluff became a Monument in 1903. There are many places on the bluff where it looks like things have been sanded off—and they have; it is Park policy to “erase” any signature after 1903. It looked to me like there are sensors pounded into the rock at regular intervals that would detect any modern day attempt at inscription.

Spring was definitely the time to be there as summer would likely be very hot. I headed home towards Grants—another 42 miles—through the El Malpais (the badlands) National Monument. This Monument contains the volcano that produced all that lava you see along I-40—definitely something to explore on another trip.

The natural outdoor world is exciting, restorative, and infinitely fascinating. More people should spend time there!
View all posts by Outspire →
This entry was posted in Uncategorized and tagged El Morro, explore, National Monument, New Mexico, travel. Bookmark the permalink.